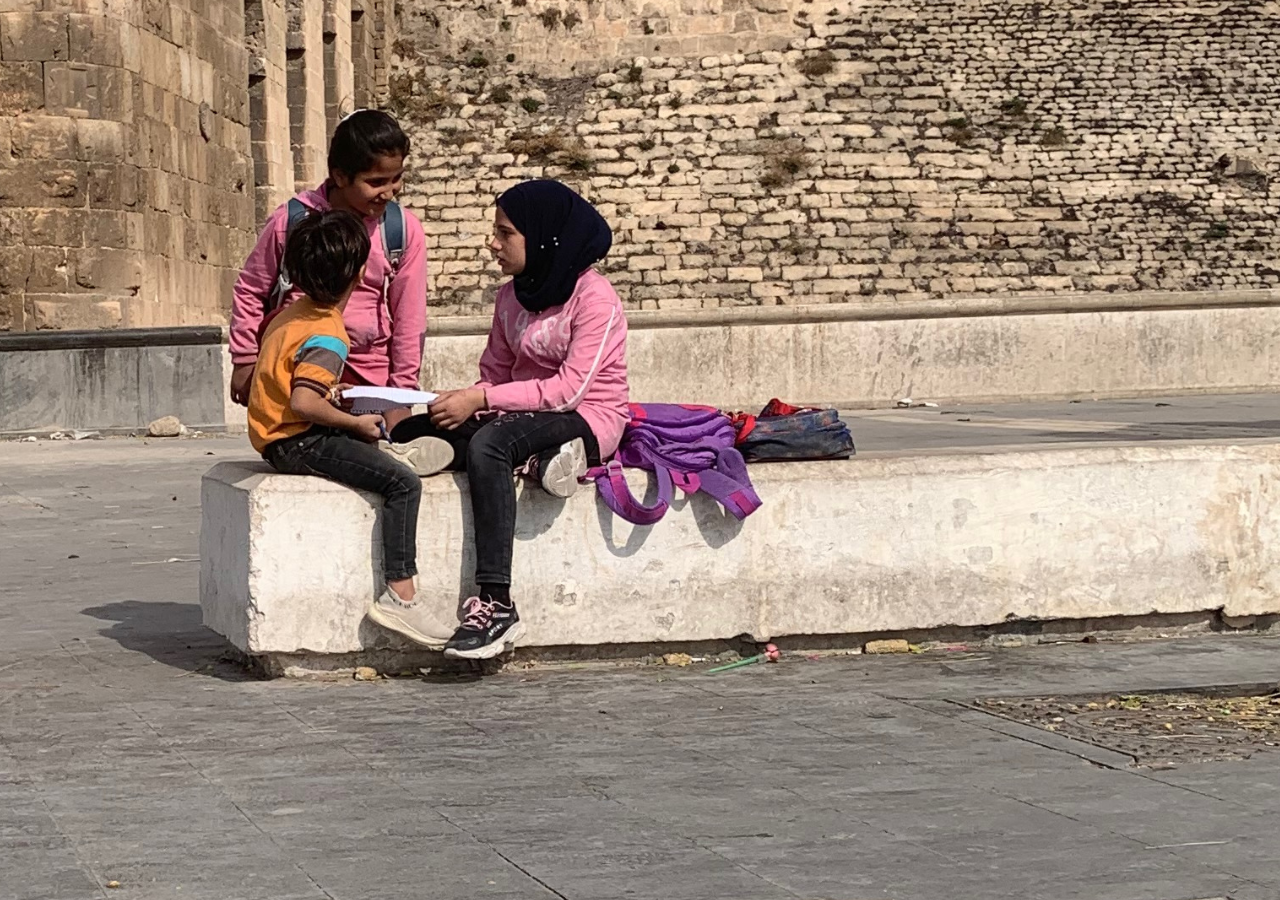 On leaving, people asked me how I could go to Aleppo. There is a war! I applied for a visa from a travel agency, flew to Beirut and had a car waiting that took me to Aleppo after a long drive. People in Aleppo asked me why I was coming. My answer was that I wanted to see old and new friends. The war finished in 2020. I found people looking for normalcy and happy to see a visiting friend from the west. It made them feel normal again, they said.

Why did I go? There are many reasons, but mainly because it is time to return to this fantastic city and its resilient people. Because we should not forget that this area is part of the cradle of our civilisation, Aleppo is one of the oldest continuously inhabited cities in the world; it may have been inhabited since the sixth millennium BC. From the first human settlements to the Hittites, Assyrians, Arabs, Mongols, Greeks, Romans, and Ottomans. Christianity flourished in these lands and then cohabitated together with Islam until today.

This last war was one of many because of Syria’s geographical position as mainland access from the west to the Middle Eastern countries. An indispensable pathway from the Silk Road to today’s bloody hunt for energy. A decade of war between Iran and Russia, traditional associates of Syria on one side and Qatar and its many friends on the other, was played on Syrian grounds. If the intention was to ensure a bloody civil war and the country’s destruction, the mission has been accomplished. The war in Ukraine today looks somewhat similar: no winners, only losers.

Aleppines need a distraction and not only from the ruins of war (60% old the UNESCO’s protected old town, home to many, is gone). Ten years of war and the world pandemic have shattered the country, but the insistence on keeping cruel and useless sanctions is the main reason Syria’s economy cannot function today. No one wants the responsibility of a change of regime because it will turn Syria into another Libya/Iraq for generations and generations. Syria is out of the news; too many new dramas are clamouring for attention on the media and social channels.

Everyone I met said that life is too difficult and gets worse daily. Unemployment is vast, an average salary is $35 per month, and one egg costs $1. Electricity runs for 2 hours a day; water sometimes is cut off. Life continues in the city that once had circa 3 million inhabitants and now has 1.2. Cars are very few as petrol, Syrian petrol, is expensive and limited to 25 litres every ten days per family. This includes gas for cooking and heating. The cost of living is spiralling, and even those lucky to have a job live below the poverty line. Prices are lower than in the west but not much lower; a sandwich is $2, or 10,000 Syrian lire

Aleppo hosts many, many no profits and NGOs that help relieve hunger and reconstruct the infrastructures destroyed in ten years of war.  Many sides of the relief brought by these vast agencies are helpful for the reconstruction. However, the need for data sheets results is turning a nation of the finest traders into beggars.

The civil war has divided the country. The most vulnerable, disenfranchised, and poor, mainly living in smaller towns and the countryside, were easy targets for the various factions from inside but especially from outside Syria that wanted support. Not too different from what has happened to the USA and the UK, but with the difference that those Syrian discontented have been trained, paid, drugged, and heavily armed, and sent out to kill, together with foreign mercenaries. Now no one knows what to do with those who have survived. They are confined to the Idlib area, receive much humanitarian help and are under the influence of Turkey. No winners, only losers. Idlib protectorate and other regions of Syria could be cultivated again to provide agricultural products for all the Syrians to ease the crises. Still, the border between Idlib and the rest of the country is as close as possible. No war, no peace.

How many Syrians have left the country? Of the over 21 million Syrians in 2010, half a million have died, and 13 million are displaced within or outside the country. Christians were the 8% and now are the 2% of the population. Syrian men, women and children keep on leaving, drowning in the Mediterranean sea or being unwelcome everywhere because they feel they have no choice: scientists, doctors, entrepreneurs, builders, translators, psychologists, artists, shopkeepers, farmers, and lawyers. How will Syria survive without them?

As usual, children save the day. These lively Syrian children and young adults going through collective and personal traumas are helping their families, playing football, making friends, having hobbies, and if they can, going to school, studying, and learning. What about the future? Education is the key to the future for those affected by years of hardship and trauma. Schools are safe places for reopening the dialogue interrupted by war. The opportunity to study can be a motivation not to emigrate abroad. The danger of indoctrination to the less educated is still very real in society.  Young girls and boys can equally hope for a better future that includes digital literacy and foreign languages.  Only the opportunity to study can bring peace and a brighter future.

Once I crossed back the Lebanese border, reality hit me in full. Syria is destroyed, flattened and left without hope for the future. Lebanese border guards looked well-fed, easygoing and cracked jokes, and Lebanon is not a dream country. Lebanon has its problems but compared to Syria, it looks like Disneyland.

To send a child to school in Aleppo

May this holiday and the new year bring you peace of mind, good health, and…

HOW YOU CAN HELP

Copyright © 2022 Crete for Life - P.O. Box 64 Ierapetra 72200 Crete, Greece - Privacy Policy - Cookie Policy
Back To Top
×
Manage Cookie Consent
To provide the best experiences, we use technologies like cookies to store and/or access device information. Consenting to these technologies will allow us to process data such as browsing behavior or unique IDs on this site. Not consenting or withdrawing consent, may adversely affect certain features and functions.
Manage options Manage services Manage vendors Read more about these purposes
View preferences
{title} {title} {title}